Cheap Flights What GST can do for you? Explained - Vatsin Technology

With the Government giving green signal to the four supplementary GST bills on March 29, 2017, the mayhem around GST has hiked both in common people and the business class. You may find people talking about filling up your inventories with common supplies claiming that the prices would rise after 1st of July. Another chunk of mass is going all out to speak in favor of GST bills, leaving you nipping your hair in confusion, torn between the supporters and the challengers.
Stop fretting, for its time to sit back and do your homework on GST. We are here to let those creases on your forehead to iron out and help you in preparing an action plan for the upcoming month. So buckle up! Prepare your notebook and start taking notes.

What Does A Layman Need to Understand About GST?

Okay, we have enough technical and economical terms roaming about on the internet today. So we have made every effort in this article to steer clear of all of the confusing stuff and fit into your head, the very basic implications of GST bill.

So starting off, Let us discuss the need of GST altogether. Let’s take an example- Mr. Patnayak is a thriving businessman and he wants to start a business. He needs raw materials that need to be imported from China to Kanpur- via various road and rail routes.  Everything is okay until he gets down to the process of cost estimation. He discovers that he needs to pay a troublesome hoard of taxes besides custom duty for importing material and for transporting in through the states. In his study, he finds out, that sometimes even a TAX IS TAXED BY GOVERNMENT.  Sounds baffling, right? It is this very effect of cascading taxes that a liter of petrol that marketing companies sell out initially at Rs 25.46 is sold at Rs. 62.51 in Delhi.

This is the very reason why GST has been introduced in the picture- to streamline those zillions of direct and indirect taxation regimes and to unite our nation through a uniform tax rate.  It is notable that we still have dual taxation- central GST or CGST and state GST or SGST.

GST will curb all the indirect taxes being levied currently in the nation and instead of a fluctuating, state varying rate list, the interest rates will be pegged at a peak of 20 percent. The taxes that will be subsumed by GST include sales tax, CENVAT, OCTROI, excise duty, service tax, entertainment tax etc. 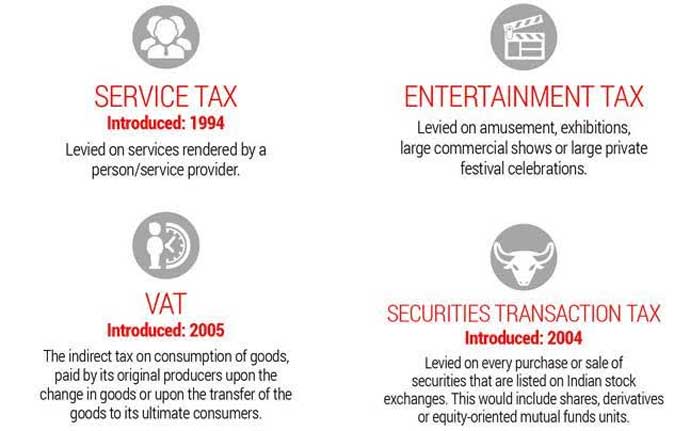 So by and large,  GST or Goods and Service Tax , will simply create an economic environment akin to a common marketplace where irrespective of the origin of the product, all the goods will have common treatment and common capped rate.  That is all you need to know about the technical aspect of GST to be able to function optimally within a GST enabled economy.

So how will all this help common man in India? Three things-

GST and the companies that “Produce”

Manufacturing companies form the backbone of an economy but our companies have been in a sluggish state since too long. Right now, many producing companies are in a gibberish state, unable to decide whether they should stock up their inventory or reduce it. Before we answer this, let us look at following points-

So considering these factors, what should the “Producers” do? Should they stock up? Should they let their stocks dwindle down? The answer is- It depends. Stock and assets back up remain an amalgamation of various factors including obsolesce cost, storage cost, finance cost etc. Sure, GST will delete multiple taxes levied by various organizations but looking at this issue from a single perspective will do no good.

How Will GST manifest itself for Consumers?

Well, currently, until we have final rates of entire things post- GST launch, GST will remain as a box of chocolate for the consumers. You will never know what you’ll find next. But yes, we can describe some general trends that will be followed after the pan India GST implication.

How Will GST Effect Freelancers?

Freelancing in India is currently bound by no set rule and pattern but with the advent of GST,  freelancers with taxable income will need to get registered under GST and pay tax on the services provided. Have a look at the impact of GST on freelancers-

Is GST a Boon For Your Startup?

GST has created mixed emotions in the startup business regime. People fear that the taxes would be increased as many startups rely on freelancing as well to create some form of revenue, but overall GST is deemed to benefit the startup industry as a whole. The reasons are-

Things to do Before GST framework is applied-

We provide best and fastest GST implementation service in NCR.

Want to join the discussion?
Feel free to contribute!

What is GST explained in a 6 min video.
Scroll to top